Southwark Council leader, Peter John and the Mayor of Lewisham, Damien Egan have called on London’s boroughs and business groups to get behind proposals to upgrade and extend the Bakerloo line.

Southwark and Lewisham have called on other London boroughs and business groups to Back the Bakerloo line extension.

Speaking at the London Infrastructure Summit, the two local authority leaders called on London’s other councils, as well as business groups, to get behind TfL’s developing proposals to upgrade the ageing Bakerloo line and extend it along Old Kent Road and on to Lewisham and Hayes.

The Bakerloo line extension would see up to three new stations on Old Kent Road with the line continuing to New Cross Gate and Lewisham and potentially as far as Hayes via Catford and Lower Sydenham. 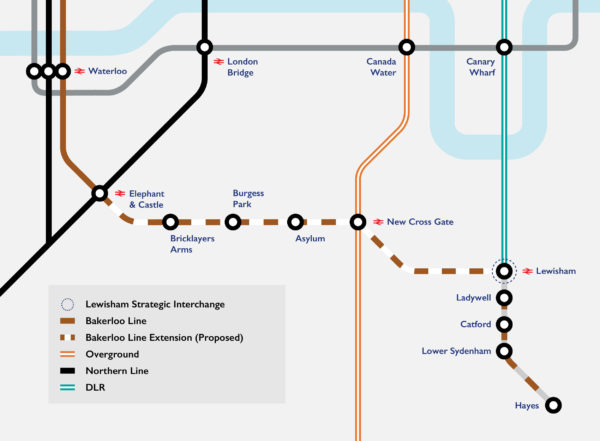 Now, TfL is also proposing to overhaul the entire Bakerloo line – bringing in modern, walk-through trains and new signalling. Although still subject to funding, together, these two complementary projects – the overhaul plus the extension – would amount to a ‘new Bakerloo’ and act as a catalyst for growth across London from Harrow to Hayes.

Combined, these two projects would help to deliver up to 110,000 new homes along the length of the line.

This includes 20,000 new homes for the Old Kent Road area but it also includes neighbourhoods on the other side of the city such as Old Oak Common.

With up to 36 trains per hour at peak time, the scheme would allow 87,000 more journeys into central London each morning, boosting the capital’s competitiveness and productivity as well as reducing congestion on the rail network.

The benefits for south east London would be especially transformative. The scheme would help to deliver 27,500 homes in New Cross, Lewisham, Catford and Deptford as well as the 20,000 expected in the Old Kent Road area.

“We believe the extension will make a huge difference to people living and working in Old Kent Road, as well as bringing wider benefits to London. There will be a new town centre along one of London’s most famous thoroughfares – Old Kent Road – and the extension is key to delivering more affordable homes, jobs and services to this part of London and opening up new opportunities for people across the city.”

“We’re hugely excited about bringing the Bakerloo Line to Lewisham which will significantly reduce journey times into town, and help provide thousands of new, social homes across the borough, as well as thousands of new jobs through the project itself and from bringing more businesses to Lewisham. This is why we’re meeting business leaders and council leaders from across London to ask them to Back the Bakerloo.”

More than 18,000 people have already pledged their support for Southwark and Lewisham’s Back the Bakerloo campaign which launched last year.

Now, with plans for the extension developing rapidly, and with the addition of the upgrade, the two councils are calling for businesses and politicians – along the entire route – to Back the Bakerloo.

Sign-up today and add your support to our campaign