Plans are underway to restore the historic mural at the former Kentish Drovers pub on Old Kent Road.

Before Old Kent Road began humming to the sound of the motor car, it wasn’t uncommon to see herds of cattle traipsing along the street en route to market.

Old Kent Road was once used by Kentish farmers as the quickest way to deliver their livestock to London’s meat markets, primarily Smithfields. In order to rest and fatten up their cattle during the journey, the Kentish drovers would often take a break at pastures near the junction with commercial road.

Today, an early Victorian pub, named the Kentish Drovers, presides over this junction. Currently operating as a Thai restaurant, the building has been Grade II Listed, largely thanks to the unique, curved mural which adorns the facade. 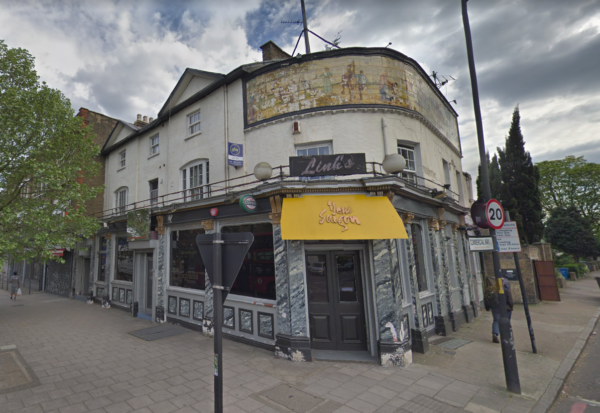 The mural, which was installed in the late 19C by Daulton’s of Lambeth (now Royal Daulton), depicts a bucolic scene featuring drovers on horseback delivering their cattle, while children and dogs scamper around at their feet. It also includes another element – once a familiar sight in the countryside just south of London – a windmill at work on a hill in the background.

The mural has clearly seen better days, having been weathered and worn over the years. However, it’s still possible to make out the scene and new research, commissioned by Southwark Council, suggests it could be successfully restored.

In the summer, the council hired Lesley Durbin, an expert from the Tile and Architectural Ceramics Society, to take a closer a look at the mural and to put together a proposal for bringing it back to life. She revealed that the mural had actually been painted on structural blocks rather than tiles (unusual for ceramics) making it an extremely rare example of its kind. The only other example in London is held in the V&A Museum.

The good news is that the research suggests it should be possible to preserve this unusual piece of heritage so that the community can enjoy it for many more years to come.

Now the council is considering options for commissioning the necessary restoration work, which will be funded with regeneration money from the Community Infrastructure Levy (CIL). This levy, which is paid by developers with building projects in Old Kent Road, is being used to fund various initiatives to benefit the local community, from improvements to transport through to new parkland and heritage.

More than £160m of CIL funding has been raised since 2015 from developments given planning approval on Old Kent Road.

Read more about the benefits of regenerating Old Kent Road.